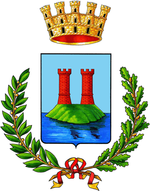 The city of Sestri Levante

is a town and comune in Liguria, Italy. Lying on the Mediterranean Sea, it is approximately 56 kilometers south of Genoa and is set on a promontory. While nearby Portofino and the Cinque Terre are probably the most well known tourist destinations on the Italian Riviera, Sestri Levante is becoming quite a favorite among Italians. This once quiet fishing village is slowly turning into a tourist hotspot, developing an old and a new town.

A sea that is known and appreciated for the light blue vast expanse of the limpid clean water and for the quality of the tourist facilities; a sea that borders on the land where the transparence of the water draw crystalline reflections in the magic meeting of the two bays: Baia del Silenzio and Baia delle Favole. The former looks at Punta Marinara's rocky spur and the latter looks at Golfo del Tigullio. Sestri Levante is the place where the sun enlightens golden sandy shores that are framed by the amphitheater of the mounts where you can enjoy the half-light of the olive tree grove and of the Sestri's deep pinewoods. Sestri Levante is a famous holiday resort with two beautiful shores: Baia delle Favole (from St. Anna to the west) and Baia del Silenzio (called by the local poet Giovanni Descalzo) that links the isthmus to the promontory. Thanks to the clearness of the water, the natural setting and the colourful presence of the houses, Baia del Silenzio was one of the most favourite places of Sestri's great guests like Lord Byron, Goethe, Wagner, Hans Christian Handersen ed Ernest Hemingway.

Sestri Levante has its origins as an ancient maritime and merchant center. Originally a small island with a promontory, it was later connected to the mainland. In Roman times, it was known as Segesta Tigullorum (or Tigulliorum) or simply Segesta. It was mentioned in the year 909 in a certificate of a man named Berengario, in which part of its territory was ceded to the basilica di San Giovanni di Pavia; after it was invaded by the Barbarians. During the Middle Ages, Sestri Levante began to expand, probably giving the fortress appearance that is due to the terrain. In 1133, the noble family of Lavagna, the Fieschi, attacked Tigullio, the gulf in which Sestri Levante is located, however, they were fought off by the powerful Republic of Genoa, and therefore, Sestri Levante became a part of the republic, for military protection. In the year 1145, the abbey of San Colombano was acquired by the Genoese, and was transformed later into a castle. In 1170, Sestri Levante was attacked by a naval flotilla from Pisa, but was able to withstand the attack. Sestri Levante is mentioned by Dante Alighieri (as "Siestri") in Canto 19 of The Divine Comedy.